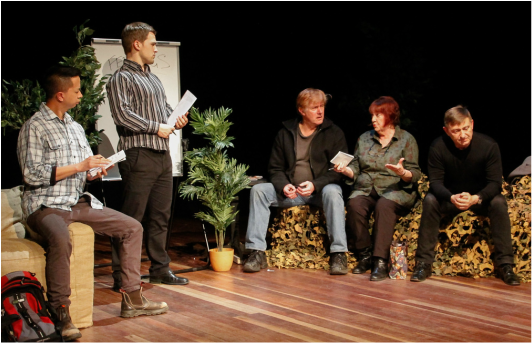 Frank is a war veteran.  He's an angry, disturbed man dealing with Post Traumatic Stress Disorder.
His long suffering wife, Trish, has had a gutful.
It's crunch time.  Get help or get out!

A production of power and eloquence ... the most potent anti-war play I have seen.  Ever.  Colin Mockett, Entertainment Geelong
A brilliant, first class portrayal of an incredibly difficult subject!  Max - audience
The most powerful theatre I have seen for a long, long, time.  Annette - audience
Foxholes is one of those pieces that stay with you, it's so honest and raw.  Sandy -  audience

Somewhere in suburban Australia, Frank, a veteran of the Vietnam war, is cracking under the strain of Post Traumatic Stress Disorder (PTSD).  As he searches for understanding in the stories and friendships of fellow diggers, his wife Trish finds she must also sift through the past in order to look to the future.